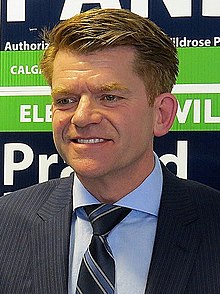 I've been following the UCP leader campaign here in Alberta with great interest. There has been a very anti-Kenney sentiment in the air around here, in particular with Kenney's top down party style, the lack of pushing back at Ottawa and over COVID restrictions/vaccine passports.

Brian Jean lost to Kenney and it looks like he lost because he was politically outmaneuvered - rather than a battle of ideas. He's obviously sour and was on the anti-Kenney train ever since. Let's just say that I was a bit excited that he's back. I wanted to see what he had to prove and that he may have some fire in him.

The problem I have had with conservatives as of late is them being milquetoast. All that means is that they're very safe, very center and literally bring nothing to the table. Even though conservatives in CANADA say there are many things that need to change, they don't actually do anything all that different than the governing left. Maybe not as bad, but it all seems to be the same flavor of ice cream.

I expected Jean to come out with some fire, but I've been greatly disappointed. Absolutely nothing coming to the table with him.

His first big announcement is the 'owners discount'. 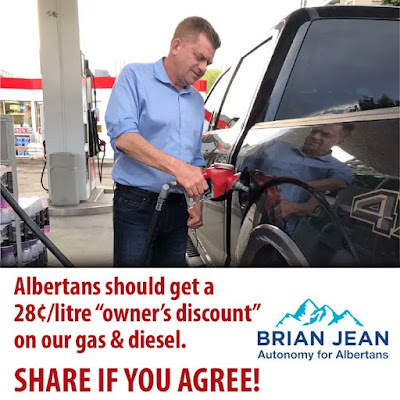 I'm not necessarily against such a thing, maybe. But this is purely political move. It's an in your face, everyone sees it, type policy. It's the implication that more or less grinds me - though I wouldn't have a problem enjoying 28cents less per litre. The problem I have is it's just politics. He also supports more rebates for electricity.  I'm more sympathetic to this as the government truly created that problem.
Things are expensive. Inflation is out of control. The big elephant in the room are income taxes, which have not been linked to inflation for years now. Every year Albertans are paying more and more income taxes on their earning power. Are we going link that back to inflation? Are any of the top candidates going to do that? Still waiting.
The gas thing annoys me because of the next thing Jean has been going on about: 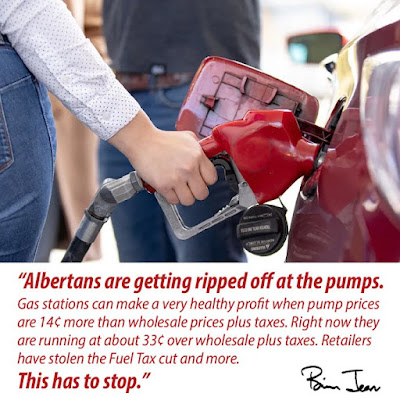 Apparently, in a free enterprise political party, gas stations are only allowed to make 14 cents a litre. And get this, if they dare make more than that, he's going to bring the the iron fist of government down on them. Am I looking at an NDP candidate here?

I can't believe what I'm seeing here, but I do recall this in the past from Jean with his desire to ban photoradar and it's starting to make more sense. Everyone hates photoradar, but his policies are all in your face annoyances. Something that is purely political, rather than real good political policies.

It reminds me of Harper. I don't want to dog on Harper because he did a few bold things (corporate tax cut, TFSA, 2% drop of GST, many free trade agreements and pretty good on foreign policy), but something Harper did that annoyed me was tax credits. He would see some vote demographic he needed and would make some incentive tax credit. Instead of simplifying the tax system, we got complexity for the sake of politics. And that is what Brian Jean reminds me of. 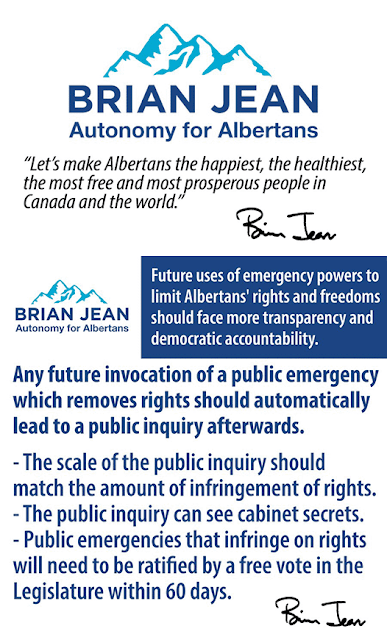 Despite the slogan in Jean's campaign, autonomy for Albertans, he will enforce emergency powers by the federal government. Quebec for example would not. The reality that he would enforce limits on rights and freedoms, then look into it later doesn't make him a freedom based candidate.

I also watched the Free Alberta Strategy first UCP debate, and again Jean was a real disappointment. Despite the autonomy for Albertans he really had nothing on how to achieve that. The main takeaways are as follows: he'll enforce everything Ottawa makes him do (constitutional or not) and he'll get change by opening up the constitution.

I do agree that the constitution would need to be opened up for a real systemic change. The reality is that the constitution will NEVER be reopened. We will never get change with the constitution. It's the same deal with the Triple E Senate proponents. It's not like when we open the constitution that every province and interest group isn't going to fight for their interests. Quebec would never give up anything, nor would any other province. There is also the other reality that a lot of Canada hates us, not because we're bad or did anything wrong, they hate Alberta because of its virtues and success. If they have a say in all this, they'll actively fight against us - even against their own interests.

In conclusion: Jean has been a huge disappointment to me. I honestly don't know what style of policies I'll get from him because he doesn't seem to have any sort of consistent ideology that I can get. Will he lower my income taxes or decree I'm making more than I should and come take it?

And here I was thinking that Danielle Smith was going to be the milquetoast one and she's come out with some fire - though hard to say how that will translate in actual office.

August 03, 2020
When it comes to investing in the market, there is a lot of contentious debate about what is best. I have found that people get so wrapped up in defending their strategy that they either overplay the ideas behind the strategy or just outright misrepresent them. I understand wanting one's investment strategy to work best but let us not delude ourselves. "Best" is not something that is easy qualitatively to measure when various investors have different risk tolerances, timelines and goals. The above is no less true when it comes to the Efficient Market Hypothesis (from now on as EMH); both from those for and against the idea of it. I think both (for and against) conceptualize EMH improperly and it takes away from the value it has as an investing strategy. I will add that I have 90% of my investment portfolio invested in passive index funds, which are the products utilized by those that follow EMH and the studies following from it. That's not to say I'm biased towar
Post a Comment
Read more