There's a lot to unpack here. "My doctor... vaccinated creates more ammo for the virus to grow stronger and more resistant..." I do admire that his doctor sounds a lot like the anti-vaxx doctors on the internet, but there is much to unpack.

Sometimes I don't grasp the past that well, but I'm pretty sure before COVID19 we had vaccines. I think we had a lot of them. Small pox, measles, yearly influenza, etc. The data shows that we aren't being overwhelmed with super measles or seasonal super influenza that is worse and worse each year. It's not to say that it couldn't happen, but with the data we currently possess on vaccines - it isn't happening.

Plus, if this were a problem - it isn't a vaccine problem. It would be an immunity problem. Let's just assume we went "all natural" and much of the world was infected with COVID19. Well, most of the world would gain the immune response t-cells and antibodies to fight future infections. At this point, is the virus suddenly just going to die off or will it "grow stronger and more resistant"?

I do appreciate that people almost put a volitional component into things to help explain some evolutionary process. We try to stop the virus and bam the virus fights back with a big blow.  If only them fighting words were real.

From an evolutionary perspective (attaches the volitional ego to the virus), it doesn't have to lead to more serious illness and death. In fact, it makes a lot of sense to become less deadly. People dropping like flies isn't exactly a good way for the virus to spread around. Nor is crippling them to an ICU bed  very good for the long term evolutionary survival. The more defanged variant is a probable outcome precisely because people will get sick, have symptoms and go around spreading it.

Again, evolution and the virus both don't have volitional characteristics. There isn't a preordained evolutional direction, but the notion that it must lead to a "stronger" variant isn't true. Based on other infectious diseases it stays relatively in the same territory of "strength" or becomes something more defanged - which leads to easier spread.

"More resistant" is an interesting description. More resistant to what exactly? It's not like there is some thing in the virus that is resistant. It's not a property of the virus. Before vaccines and a previous infection, you had no resistance to the virus except a baseline immune response that fights all infections the same way. After vaccines and/or infection, you have resistance to the virus - if we're going to use the term "resistance". The virus will mutate and change over time and evolutionarily the variants that spread best will spread (it's tautological). If the immune response starts to wane, we make new vaccines tailored to prevalent variant - just like the yearly influenza vaccine.

There is more that I could go into on this comment, but that one sentence I felt was worth the discussion. We don't have to go into the vaccines are only good for 6 months, as if Israel's coco for coco puffs focus on cases, cases, cases is the only thing that matters - neglecting the stellar performance of what the vaccine was meant to do - separate serious disease, hospitalization and death from a case. Israel is more of an example of politicians treating a runny nose case as equal to a ICU case - which is an example of stupid. 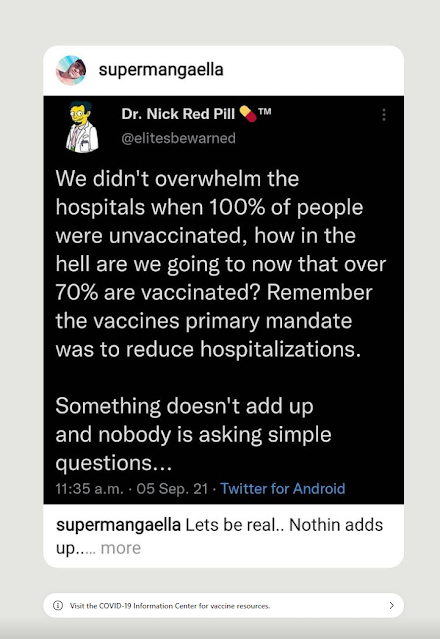 Well, if you were around during this whole COVID thing, you would have known that people were living their life under restrictions. I wasn't allowed to go to visit someone outside my household the entire time (unless it was outside). People were working from home, social distancing, etc. Today, you are allowed to do what you want. I was at a party at someone's house yesterday - as an example. Include in the fact that delta is far more contagious you have more hospitalizations.

But the fact is clear, the hospital and ICU are filled up with the unvaccinated - who make up a minority portion of people - and a tiny portion of those 65+.

The energy market is going to be something that will be on people's minds for a long time because right now there is very poor policy and ideological views driving us to a crisis. There has been a nice little bull run going on over the last few months, and this may not be the crisis. It's something that may immerge here, but it might be 5-10 years from now. For the longest time I've been a passive index investor , and I still am for a nice chunk of my portfolio, but over the last 18 months I've decided that I'm going to apply my own judgment to the market place and invest accordingly. Over this time I've accumulated a pretty sizeable portfolio of LNG (Liquified Natural Gas) companies, in particular upstream and midstream companies. Renewable Energy or Green Energy are Unreliables There is a political push for green energy. It's driven by the moral ideas that green energy is this universally good  energy and all the other reliable energies we use like fossil

An Open Letter to Jason Kenney

Dear Premier Jason Kenney, On September 3th, 2021 you announced that due to the unvaccinated people in this province, the hospital and ICU are filling up. The ICU in particular is reaching max capacity. You also announced that due to this everyone's freedom will be punished. Masks for all. Private businesses that serve alcohol are restricted from serving alcohol after 10 pm and unvaccinated people should limit their group settings (how will that even be enforceable?) I can't help but feel betrayed. I am a person that went out and got the 'jab' as soon as it was available to me. The Federal Government did a horrible job procuring vaccines, so I waited. I dealt with restrictions and lockdowns longer than I should have. My freedoms were stifled, for the common good of the healthcare system. And here we are, with a 70% fully vaccinated eligible population and the restrictions are coming back again. It seems like a recurring theme where the people who make smart choices are