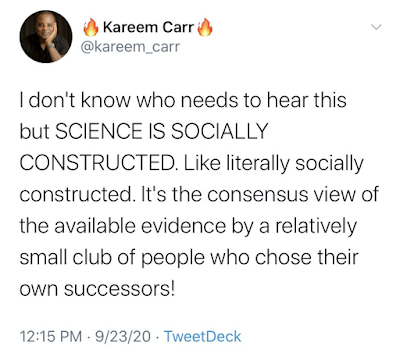 Even though most of my discussion on the 'math attacked' series has been something more than just math related, this particular form of attack honestly has nothing to do with math and is broadly applied to anything and all things.

I suppose this is a fair definition, but on its face it looks rather benign. I want to further unpackage social construct because it comes with big epistemological premises.

What is an idea? In this particular case, idea is a concept. The world out there and trying to understand it is the process of creating concepts. The world has things like rocks, ducks, and trees. The world has natural laws like gravity, friction, and conduction. The world contains spatial properties, causality and time. These are all concepts.

I think on the face of it, one doesn't develop concepts socially. If I were to shipwreck myself on some tropical island alone, the notion that I would never be able to understand this place and develop concepts beyond the ones I already know is laughable. I can learn about this place, discover new things and learn new concepts.

What is really meant by 'social construct' is something more Kantian; do we discover the truth out there or do we create it? Concepts are created by individuals. Duck, tree, and gravity are all concepts that have been created, but are they about things discovered out there in the world or did we create this world and the things in it? The Kantian view is that we know nothing about the real world and it is not possible for us to discover anything - it's created.

Kant had his particular view of how one creates reality - automatically and preconsciously, but those that use 'social construct' are speaking of something a little different. In this way you automatically create reality based on your social class and power that comes with it. It's a very Marxist view. There are no individuals. We are just automatons advancing our class/group/race/collective struggle against others and the concepts we create are nothing more than for our class/group/race/collective.

This is all that is meant by this. If you take the concept of integrity, this is constructed and constructed to benefit only a specific class of people. Integrity, to those outside this class, is a prison - an inescapable concept prison. Other people may roll with the idea of integrity as contradicting your own moral beliefs. Who's to say that one is better than the other? The only reason we accept integrity as moral uprightness is the power structure in society.

And these thoughts reach into a variety of topics we see manifesting in society such as gender pronouns.