The topic of 'decolonizing' math and science has been on the rise. The problem is that this movement isn't about math or science, they're just the talking points for the real target: objective truth. While spending time writing an article on this attack on objective truth, I've been forced to cut out my discussions on math – which I do find interesting. I'm sharing these topics here because math needs its own positive defense.

The most annoying aspect of seeing people attack the objective nature of math is how ignorant the attacks are. I can't say I've seen anything that is worth any value. Games, redefining, and in general sophistry. "If we use 2 to represent 2.5 than 2+2=5. Kaboom. Mind Blown." 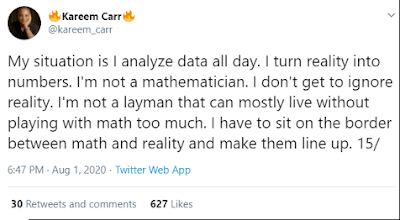 As much as these games are played, that game players will still wrap up these very odd attacks in some semblance of the real world, and countering that with objective math as mere abstraction. Math is about the real world, despite all the Platonists and Formalists in math and these platitudes towards the real world is anti-conceptual in nature.

Operations Beyond the Operation 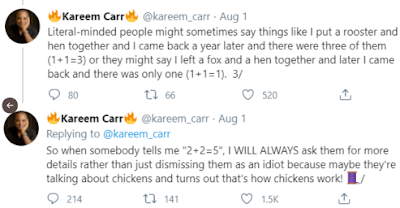 …that's how chickens work. It's good that our math PHD understands how chickens work; the process of reproduction and the concept of offspring. Aliens visit earth a billion years ago, 0 humans and they come back today and there's lots of humans, 0=7billion. That's not how addition works. Addition is the counting of like magnitudes into a total summation.

It's hard to address something this stupid. Kareen Carr isn't stupid, so what is his deal playing such a stupid game with math? My article on objective truth addresses this.

Operations on Likes out of Context

The takeaway here is that money is money and being the same thing you can easily add them, but adding what money buys in the economy is not valid. The same is true of buying in bulk or some other similar example. Another great way of looking at this is removing money from the scenario, as money is really obfuscating, and let's use distance. We both leave Toronto on a road trip to Montreal. You drive it at 550kms and I take the scenic route and it takes 800kms. So 550=800??

Well, when you have a system of purely integers, you have to recognize you can't properly measure a world that can't match up with it. Even on this examples face, he has to use non-integers to explain it… as in these non-integers are the REAL WORLD. 2.4 is not 2 - that's the real world. Calling 2.4 a simple 2 and just rolling with that is disconnected from that real world we are supposed to bring math down to.

The real question: 2.4 what? If you're grounding numbers in reality, what is the number? If we are talking about a magnitude of length - maybe it is 2.4cm. If one is stuck in a system of mere inescapable integers, yet units that are divisible into fractions (not integers), why would there be centimeters in the first place? Why not 24mm + 24mm = 48mm? Integer friendly.

Again, this example is ridiculously stupid. I realize he's presenting this as a precision thing, but essentially he's just redefining the meaning of '2'.

Enough of Kareem, let's see what our Fields Medal winner is up to. 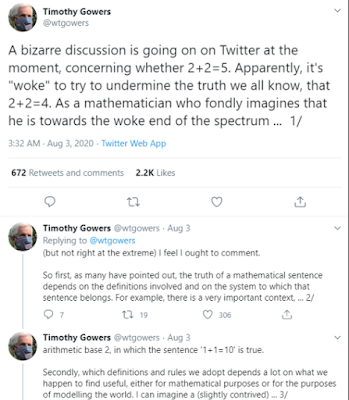 Another game being played is completely linguistic in nature. I don't think anyone disputes that 01+01=10 in base 2 because it is the same thing as 1+1=2. All that has changed is the representative scribble variable on a sheet and the abstraction based rules for working with the numbers. This is linguistic in nature, not because base 2 is not a valid form of math, but due to the fact that it was trotted out merely to screw around with people. The interest isn't in the math or the real world; the interest is in people and what is going on in their mind - presented only to intellectually paralyze them with essential fluidity of math.

The real question: what is the motive to talk like this and to play games like this? Someone comes over to my house; "hey want a drink of water" "sure" and I hand them some rat poison, "Oh, the sounds that came out of my mouth (water) actually represent the object rat poison - you should have inquired what these sounds really represented for me."

This game can be played ad nauseum. For example 360 = 6.28318530718… (which is 360 degrees is equal to 2π radians) or 360 = 1 (as in one rotation or one birthday cake). Radians and degrees are things that don't exist, though their relational attributes accurately describe the real world - which in math are types of ratios. 360 = 1 rotation or clock math (as Kareem attempted to play with) is the same game.