The topic of ‘decolonizing’ math and science has been on the rise. The problem is that this movement isn’t about math or science, they’re just the talking points for the real target: objective truth. While spending time writing an article on this attack on objective truth, I’ve been forced to cut out my discussions on math – which I do find interesting. I’m sharing these topics here because math needs its own positive defense.

The people actively fighting to ‘decolonize’ math have certain vectors of attack to disintegrate math. The goal is the attack on objective truth, but it’s important to understand the vectors of attack. Precision is of measurement and the degree of units of magnitude. Simply put, something measured to the nearest nanometer has more precision than that measured to the nearest millimeter. 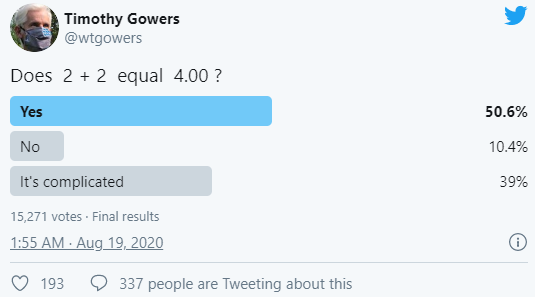 I want to start by pointing out that Timothy Gowers is not some internet SJW loon. He’s a mathematician, professor, and Fields Medal winner. Even though nothing is expressed here, based on Timothy’s past tweets trying to appease the 2+2=5 crowd, there is an implication. He may be suggesting integer + integer = rational number, but when I see 4.00, I see someone bring precision into the mix.

Update: Gowers did clarify this poll with a series of incoherent and unrelated thought tweets (22 of them) that hint at precision, integer vs real numbers, and various math games. As expected, instead of any clarity, there was more disintegrated confusion. He did clarify that he’s not a Platonist in math (good), but views himself from the formal theory – which means math is merely a numbers game detached from reality and something to play around with.

What is the ‘Precision’ Attack?

Abstract Numbers Allow for the Infinite

Numbers, as a system, were built in such a way to allow one to go beyond the perceivable bounds of the real world need at a specific timeframe. There was a time when counting didn’t see the need to go past of a few hundred thousand. The idea of needing more than a million was viewed as silly because a normal city only had 50,000 and population was the highest conceivable thing to count. Even though counting didn’t conceive a need of going past a certain threshold of numbers, numbers were still constructed to allow for one to expand it, if needed. As science progressed, we found the need for more numbers. Speaking about DNA cells, we are into the quadrillions.

The same is true of precision. Numbers can go as far as one needs in precision. There was a time, where the most complicated things people did was make buildings, a precision of millimeters was as far as needed. Microprocessors are working with the precision much more intense like nanometers.

The Takeaway and The Motive

While writing this article, I found the real motive to become clear. Even though the argument that a 2×4 with more precision would be 2.0015″ is conceivably a real thing, why isn’t the same thing plausible with a human? (as in a 1.00000001 human?). The takeaway is that this isn’t about math, but the concepts that math is applied to. This includes humans, 2x4s, and units of measurement. It’s about people’s conceptual faculties.

The reason a human isn’t 1.000 is that it doesn’t matter to the concept of a human. There’s just a human and there’s not human. You’re not more quantity of a human if you’re overweight, nor are you less quantity of a human if you’re below 170lbs. The same is true of a 2×4 board. Even though one could take the precision to some infinite range, it’s not part of the concept beyond the range of the 2×4 concept. This is why 2.0″ precision with regards to a 2×4 is right and 2.0″ precision with regards to a microprocessor is wrong.

When one is expanding the precision outside the range of the concept, they’re deconstructing the concept with the inevitable goal of destroying it. This is what it’s all about.