This person seems to be important enough to show up on my Twitter feed, constantly defended. I also see the metacanada freaks on reddit are all over her with love and admiration. From what I've seen from her she seems like a typical alt-right Trumpist that plays white identity politics. That pretty much disqualifies such a person immediately for me. But is she a Nazi or white supremacist? I thought I'd finally figure it out just so I can cut through the rhetoric of the 'new right' and the reactionary left.

Daily Stormer is a white supremacist website. I'm not sure if they're officially linked to Storm Front, the massive online white supremacy forum, but it would seem their name was taken in that spirit. The site features podcasts of various white supremacy creators including 'The Krypto Report'. This was the podcast that Faith Goldy was on.

The Krypto Report and Faith Goldy 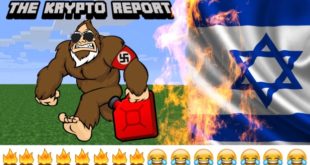 I'm not going to go on in detail regarding this podcast. They're nazis and that's that. The image above is literally their own chosen image to represent an episode. Due to attending this podcast or at least the financial and media fallout to Rebel Media - she was fired.

Here is Faith's response to all this. This tweet was deleted by her (I guess she wasn't going to stand by it?). Tweet procured by archive.org. 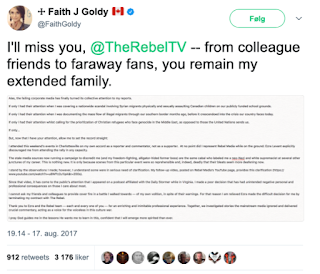 Is there a possibility that she was completely unaware of this podcasts nazism? I suppose. It's not like one can expect to know every fringe group in the world, though I regard this as a short leash. When stacked against other evidence it seems less and less likely to be an innocent coincidence.

Here is the audio of the podcast. Andrew Anglin's name was brought up during this podcast. Again she may not know the guy, but he's the founder of Daily Stormer.

I will add that there was a joke that was circulating around that she made about Ezra being a Jew. At first I thought it was a stupid joke, but harmless. The fact that this joke came on The Krypto Report makes it very suspicious she didn't know it was a white supremacy podcast. At the end of their interview it was asked by the host (for his viewers) if Ezra (who is Jewish) mixes meat and dairy. She responds, "I’ll tell you that if you — and this is something that he agrees with — if you ever offer him free bacon, it’s free — free bacon — anyway…" If there wasn't a throwing a bone to the audience she is aware of, I don't know.

Faith went to the Unite the Right Rally in Charlottesville. This protest was a white supremacist rally. It was organized by Richard Spencer and Jason Kessler, both alt-right white supremacists. Featured speaker at this event was someone that goes by "Azzmador" or known as the host of The Krypto Report that interviewed her in the podcast listed above.

Now Goldie said she just went there as an impartial media person to checkout the event. She was just a person, not representing Rebel, because Ezra Levant told her not to go. During her time there she didn't end up seeing the featured nazi speaker for which she had an interview with later, allegedly. In her interview she spoke about this event as the peaceful 'right' and the violent left. Not as the white supremacists (who do have the right to free expression and protest) versus the violent left. There's a difference in the way she talks about the narrative of this event. Even the discussion on the podcast devolves into this white men + testosterone + left's identity politics = no choice to get violent.

I have very little sympathy for those that associate, reference Infowars (and Alex Jones). Faith Goldy did go on the Alex Jones Show. Something she is more than happy to display on her Twitter. For those that don't know, Alex Jones (and his website Infowars) is a conspiracy theorist and general paleoconservative politics. Paleoconservative's tend to fall into that conspiracy view, very nationalistic and riddled with racists. It's despicable that anyone would entertain this guy or go on his show.

The 14 Words and Faith Goldy

The 14 words is a Neo-Nazi saying, typically used more cryptically like 14 or 1488 (88 means heil Hitler). The 14 words is "We must secure the existence of our people and a future for white children". It's basically a more condensed version of Hitler's from Mein Kampf.

What we must fight for is to safeguard the existence and reproduction of our race and our people, the sustenance of our children and the purity of our blood, the freedom and independence of the fatherland, so that our people may mature for the fulfillment of the mission allotted it by the creator of the universe. Every thought and every idea, every doctrine and all knowledge, must serve this purpose. And everything must be examined from this point of view and used or rejected according to its utility. (Vol. I, Chapter 8)

This is Faith Goldy on video saying the words, as requested when she was talking with "Millennial Woes" - who happens to be an alt-right, white supremacist. It appears that her... ignorance... with who she speaks with is not a one off - if we are to take her claim. This particular story was found by Right Wing Watch.

She proceeded to double down and defend her use of the 14 words because everyone else, apparently, can say it without problem. Two wrongs don't make a right Faith.

Faith did a video on white genocide for the Rebel. It has since been pulled. Here is the archive of the page, but unfortunately no video. The tweet for the video below: 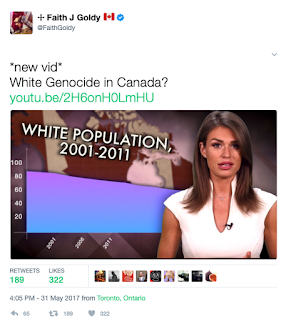 "Ethnonationalism is the greatest propeller of human history." - Faith