There are a few things that make me quite skeptical. I find the science to be quite sloppy and maybe I'll get sometime to go into this, but the big thing is that proponents generally talk a big game and then don't give a shit about implementation.

If we're truly at the end, where we need to ACT NOW to save the planet, why is proposed policy, implementations, and feel goodery so milquetoast.

So here's me, sitting on the sidelines watching. The end of the world is coming and all the proponents and people of power parroting this allow bad players to keep on doing their thing, they support energy options that move us no closer to fixing anything (while ignoring or HATING nuclear that is the only option that truly works) and they parade around products that are worse than conventional - and call them zero emissions.

What am I supposed to think?

This really boils down to two questions for me:

Should we act? No is my view.

But I like to discuss the second one more. Why? Simply, Canadians want to fight climate change in overwhelming numbers. Politicians will fight it and I want to see the best policies put in place. Policies that damage my standard of living the least.

Carbon Tax is the Best Option

Both Justin Trudeau, Andrew Scheer (the two big parties) and the NDP are all planning to meet the Paris targets. Scheer says he's going to do it without a carbon tax.

This is my issue and my whole point that conservatives tend to not get; a revenue neutral carbon tax (ie: a tax on carbon and a reduction in income tax) is the least impactful method of reducing carbon. It's one of the few ways that lets the market work, where regulation and red tape can actually be cut/eliminated, and allow productive action to become more efficient since productive taxation is reduced.

Manitoba's government has said they aren't doing a carbon tax anymore, but are planning to continue on with their climate change related goals. Andrew Scheer hasn't released any plans on how his non-carbon tax way of meeting Paris will happen. Ontario also is getting out of the cap and trade system, though I assume they will still pursue climate change related goals, but it all points to one thing: regulatory regime. Without a market based mechanism than how else are these magic numbers going to be met? There has to be a regulatory manner of stiff arming businesses/individuals into doing things.

I want to point out that the carbon tax, in and of itself, is not hurtful (assuming it is revenue neutral). The hurtful part is the change required to be less carbon polluting. It's the capital that is required to be invested to upgrade equipment, buildings and such. A market mechanism or the government regulation machine causing businesses and individuals to pour capital into things they wouldn't normally do is the cost. That's the penalty. That's what makes things expensive.

The problem with the regulatory machine is that it is more expensive. It is more hurtful to the economy. It creates a bureaucracy of government, of enforcement and of red tape. In the end it will cost consumers more than a revenue neutral carbon tax. It also buries the cost, where at least a carbon tax is transparent and understood.

I see conservatives cheering the end of carbon taxes in some provinces, but they ignore the fact that these same governments are going to continue to pursue the same climate goals. If they're not using a carbon tax, then it's going to be a regulatory regime. We're all going to pay more.

I've been finding myself getting more irritated by the Canadian Tax Payer federation regarding this over two particular discussions. The simple fact that they have trouble weighing costs of various forms of taxes and trade-offs makes me feel they are probably doing more of a disservice to the cause of lowering taxes. Here's Aaron Wudrick, Federal Directory of the Canadian Taxpayer Federation. 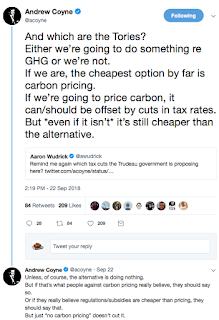 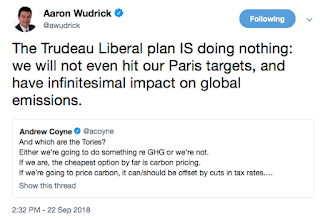 Aaron Wudrick is someone I don't like and I think he did a piss poor job at even articulating a simple point. Like most, he wants to walk this line about being for fighting climate change, but would prefer the smoke and mirrors of a regulatory regime. If he doesn't believe that, then he certainly advocates for it.

Andrew Coyne and I probably don't agree on question one at the start of this page (should we act?), but we definitely agree on the second question. We both agree if we're going to act, it should be done in the least damaging way possible. 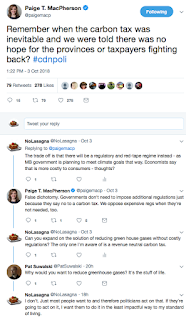 Another useless irritating reply from Paige MacPherson at the CTF. When pointed out that the Manitoba government still plans to pursue their climate related goals, she says there are more options than regulation and carbon taxes. When asked what that is, crickets she gone. The magic solution is not to be found.

Again this is another game of playing in the middle somewhere. If the CTF wants to be against doing anything, that's cool. That's where I'm at, but playing in the middle - against the carbon tax, but quasi for fighting climate change - and convinced there is a magic way of doing it only undermines the potential good.

I'm not sure what to make of Maxime's series of tweets here. In one part he says he's for the 'do nothing' column, but on the other side we can see what experiments are being played out by provinces to see which is best. Through economic study we have seen what happens with a tax on things. Right? It's not like it's not understood. The other part about market based solutions seems to be more of definition mismatches. Where he's merely defining a market based solution as market creations versus Coyne's version which is allowing the market to drive the solution out - rather than stiff arming businesses/individuals with regulations.

At first he complains that none of these solutions reach 'concrete results', yet talks about the driver of consumer demand as the solution - even though consumers can't be fully knowledgeable on such subjects. I'm an electrical engineer, but I have no clue what would be an appropriate CO2 emission quantity for a power plant. I also want a strong military, but I have no idea how many tanks or planes we need, let alone where they should be stationed.

I'll also point out (again) a carbon tax doesn't have to result in regulation. We can cut regulation to zero because the carbon tax is the driver of change not regulation. I agree that none of today's standards result in any results precisely because they're not strong enough. How about a high carbon tax and 0% income tax for both individuals and businesses? Conclusion

I hate to actually have to advocate for a carbon tax. I'm not really. I'm more advocating for sound rational thought on this issue and the prevailing headwinds of public opinion. I'm in no way interested in doing anything, but since most people today want to - I have to accept that is where the politics is going. I know a revenue neutral carbon tax - where we slash and cut income taxes, eliminate red tape and regulation is the best possible approach. British Columbia is somewhat in that direction. Obviously they suck at eliminating red tape/regulations and their revenue neutral aspect has trended out of neutral, but at least in spirit they're one of the few places that attempted to do it right.

Here is a recent article on how the government doesn't follow the good ideas by economists on the subject. Ross McKitrick: The Liberals' carbon tax plan bastardizes actual, sensible Nobel-winning economics. Let's hear a quote:

Canada has a patchwork of highly inefficient regulations with marginal compliance costs, in many cases well in excess of the conventional estimates of the benefits of greenhouse gas emission reductions. But rather than repealing the inefficient regulations and replacing them with a carbon tax, the federal plan involves adding even more regulations to the mix — then sticking a carbon tax on top. This looks nothing like what economists have recommended.

This is what is so infuriating to me as someone that doesn't even believe in climate change. Only a small minority of people are ACTUALLY discussing the proper way of doing this. We have partisan hacks on each side happy to endorse a carbon tax, with high regulation and no tax cuts - with other partisan hacks against the carbon tax with huge back end regulation and costs plus no tax cuts. Why we can't have a sensible discussion on the best approach is beyond me and it's the reason we end up with crap policies.

This particular issue sort of grinds my gears with the Canadian Taxpayer Federation more because it illustrates their total lack of understanding context with regards to tax and that makes me think they would step in the way of truly good tax reform. They see the word 'new tax', foam at the mouth and complain. How would they contemplate an issue with introducing HST in Alberta and 0% tax rate on the first $56,000 earned on income -as proposed by the School of Public Policy as a more efficient revenue neutral option? I think they would absolutely destroy any chance of such a good tax change because of their myopic stupidity. Carbon Dividend

I seen some people, such as Andrew Coyne, selling the idea of a carbon dividend. It would be a system where we have a carbon tax and people receive essentially a rebate of cash. The way Coyne and others sell it is that it is a more politically acceptable view because people will typically receive more money back than they actually spend on a carbon tax. When I hear about people profiting off such a plan, there has to be losers.

The problem with this particular scenario is that those that suffer, productive businesses, get stuck with the bill - while the general population receives a hand out. The good thing about a revenue neutral carbon tax is that both individual income tax and business income tax is cut.

The energy market is going to be something that will be on people's minds for a long time because right now there is very poor policy a...